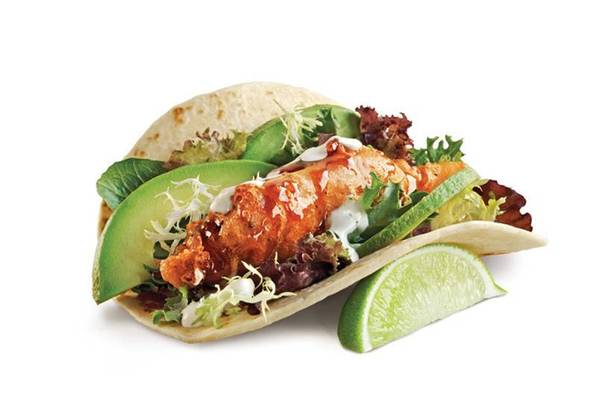 Rubio’s Fresh Mexican Grill is a lot of things: a $4-a-taco chain that wants to explore premium ingredients. A San Diego-born business eyeing the international market. A onetime maker of a cheeseburger-taco that’s now all about sustainable seafood and healthful salads.

What it’s not? A fast food business.

Among Rubio’s recent moves: An expanding catering business, a partnership with a craft beer brewery, a new line of “fruit waters” that are more healthful than aguas frescas, new biodegradable plates and eco-friendly packaging.

Sitting at one of the Carlsbad-based company’s newer restaurants in an El Segundo airport, surrounded by fast-casual giants Chipotle and Five Guys, Ralph Rubio, 56, is reminiscing about growing up in nearby Carson and his youth spent surfing and playing volleyball in the beach cities. His yellow Labrador lays quietly at his feet.

Rubio, his speech peppered with the occasional “Man!,” quickly turns to Rubio’s recent transformation. The chain he started 29 years ago has 196 locations in five states. After a more than a decade as a public restaurant, the company was taken private in 2010 by Mill Road Capital for $91 million. He hopes to eventually open restaurants overseas.

But for now, Rubio’s has “no growth plans, not in this economy.” High commodity costs pushed the company to implement a 3% price increase last year. The most recent quarter was the chain’s best in years, but same-store sales still have room to grow, Rubio said.

He’s moving cautiously, keeping an eye on the competition, especially after being “blindsided” in the last decade by the slew of rivals that popped up in the same Mexican-food space.

“You have to pay attention, to keep at least one eye open,” Rubio said. “I got lazy and let hubris set in when I should’ve been more wary.”

So for now at least, most of his sweeping plans for change are happening inside the restaurants.

After “many generations of designs,” stores are getting makeovers with “more modern, muted colors.” Customers can now see the kitchens. Just as sit-down restaurants such as Chevy’s have done, Rubio’s opened a small test kitchen several months ago inside an existing restaurant in San Diego. That way, instead of relying on focus groups, menu developers can get direct feedback from consumers.

Taking still more cues from full-service and upscale restaurants, Rubio’s is starting to look into small plates and premium ingredients such as langoustine, crab and lemongrass rice with basil.

To appeal to ever more health-focused consumers, Rubios will soon launch options such as a chipotle orange shrimp salad and mango habanero ono tacos. The chips are thinner than they once were and are fried in canola oil and sprinkled with sea salt.

The restaurant was initially inspired by Baja Califoria, but now Rubio wants to shift focus to the chain’s seafood heritage so he can experiment more with California and international flavors. Hence new dishes such as the avocado corn and sesame soy fish tacos.

The company also kicked heavily sauced items such as enchiladas off its menu along with experiments such as barbecue chicken and cheeseburger tacos.

“It was so good,” Rubio said. “But a lot of people were put off because it didn’t fit the brand. We’re a lot more focused on on going to a place that unique in our category.”

In a shaky economy and a shrinking pool of customers, branding is key. Fast-casual chains have already poached customers — including Rubio himself — from fast food companies. Diners can now get cheap eats at pop-up establishments and food trucks. Chipotle and Qdoba knockoffs abound, as do other fish taco restaurants such as Wahoo’s.

Rubio’s is now looking to grow its dinnertime business and boost its dessert offerings — areas in which many fast-casual rivals are weak.

“Boy, you’ve got to get your game on,”Rubio said. “Having a good flavor profile nowadays isn’t enough. The marketplace is expanding at such an incredible pace that you need to differentiate in

Company Overview: At Flavors of Mexican Cuisine, we believe that the best way to experiment Mexico is through its dishes, its people, and its history and live from the places of origin. We offer culinary advice for events, people or enterprises, as well as menu consulting and public relationships for the culinary industry. We also are online media with our platforms where experts all around the globe collaborate with us with their point of views, articles and editorials about the whole experience of the culinary world.. Mission: As truly passionate people as we are of our country and its gastronomy, we want to share with the entire world the unforgettable experience on what Mexico becomes through experimenting the culture and the flavors. Facebook Page: http://www.facebook.com/flavorsofmexicancuisine
View all posts by Los Sabores de Mexico →
This entry was posted in Articles and tagged california, healthful, mexican cuisine, Mexican Food, Mexican Restaurants, premium, Rubio´s Fresh Mexican Grill, San Diego, sustainable seafood. Bookmark the permalink.